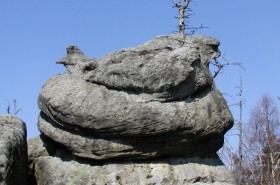 The Stolowe Mountains are the only example in Poland of mountains built of horizontaly laid rocky layers. These rocks, called joint sandstones, interlaid with marls were created in the sediments of the sea, which in late Cretaceous period (100 millions years ago) came to this region. They lie on an even older, dated from Permian period, sandstones and conglomerates. The development of the sculpture of the Stolowe Mountains began after the with drawal of the Cretaceous sea (about 70 millions years ago). Periods of the tectonic stillness, separated by three phases of tectonic movements, created the three flat-topped steps, rising to a height of:

In the process of shaping the Stolowe Mountins the very important part was played by water, not only by erosion of the surface, but also its influence underground in the wellhead zone. In the first case, the chemical and mechanical erosion created fantastic rocky forms in the exposed parts of the joint sandstones on the top of Szczeliniec Wielki and Maly, Skalniak and Naroznik and also Radkowskie Skaly and Skalne Grzyby. In the second, the removal of the eroded rock by underground water on the contact of the permeable sandstones with the impermeable marls causes the creation of empty spaces inside the mountain. This is followed by the sandstones shattering and sinking. The changing climatic conditions through the period of 7 millions years had their impact on the intensity of the sculpturing process. The geometry of the forms was shaped by the rock fissuring and their shape resembling buildings, mushrooms, animals and people was determined by different rocky layers and different binding material of the rocks. The geological structure and main features of the sculpture are explained in the picture.

To the area of National Park except the Stolowe Mountains covering much bigger northern and eastern part belong also situated in the south-western region a part of Lewin Hills built form Kudowski granodiorite. This granodiorite comes form the Carboniferous period of Palaeozoic era (360 - 290 million years ago). Czartowski Kamien (Devil's Stone) and Czerwona Skalka (Red Rock) situated at Szosa Stu Zakretow (Way of Hundred Turns) belong to some of the exposures of these granodiorites. The sandstones in the neighbourhood of Pstrazna i Jakubowice are of the same age and you can find there traces of fossilized Carboniferous plants. The oldest rocks appearing in the area of the Park are mica slates surrounding Kudowski granite. As there is an easy access to the rocks building the Stolowe Mountains and Lewin Hills, they have been for a long time exploited in numerous although small stone-pits. Nowadays, only joint sandstones are mined in the stone-pits in Radkow and near Polanica Zdroj and they are used for building and stonework. In the 19th century in the neighbourhood of Pstrazna except rocky raw materials also hard coal was mined in the hardly efficient mines.

Do you want to know more? Choose the topic