Attractions of the Stolowe Mountains

The Stolowe Mountains, being a very attractive area, have good tourists base. The area of the Park is covered with a network of trekking routes (100 km total length). They give an easy access to all rocky forms in the area: 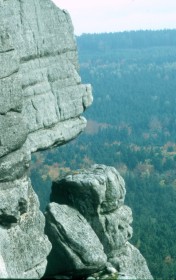 At the start points of the routes there are car parks and rest areas. Organized groups of visitors are served by Park guides. There are numerous car routes. On the southern border of the Park there is an international highway E-67 Prague-Warsaw. Cars can cross the Polish-Czech border in Kudowa Slone and Tlumaczow. One of the most picturesque car routes is "Szosa Stu Zakretow" (Way of a Hundred Turns), which goes right through the territory of the Park form Kudowa Zdroj through Karlow to Radkow. Karlow is the best jumping-off point to the most interesting parts of the Stolowe Mountains - Szczeliniec and Bledne Skaly. There are created bike routes connected with those existing on the territory of the Czech protected area CHKO Broumovsko. In the area of the Stolowe Mountains National Park there are two international bicycle routes. The "Wall" route (red) through the most attractive parts of the Table Mountains on both sides of the border. The "Stolowe Mountains" route (blue) through the towns situated near the National Park - the health resorts: Kudowa Zdroj, Duszniki Zdroj and Polanica Zdroj.

This is worth seeing!...

Do you want to know more? Choose the topic: